'Billions' Worth of Drugs Entered U.S. by Tunnel

TIERRA DEL SOL, Calif., Feb. 28 -- Down the dust-blown driveway, past a chain-link fence and the Keep Out sign, past the beefy Rottweiler and the tire swing, in a closet under the staircase in a little two-story bungalow, Mexico's most violent drug lords kept a secret at Johnson's pig farm.

When U.S. drug agents broke into the closet on Wednesday, they found a large safe. They opened it and found nothing. Then they spotted the false floor. And when they pried it up, they found the entrance to a 1,200-foot tunnel -- complete with electric lights, ventilation ducts and wooden walls -- that ended in a fireplace in a house just beyond the metal wall that separates the United States from Mexico.

Investigators are calling the tunnel in this remote section of rocky border scrubland, 70 miles east of San Diego near a small town called Tecate, one of most lucrative drug-smuggling mechanisms ever discovered along the U.S.-Mexico frontier.

"It's one of the most significant finds ever along the southwestern border," said Errol J. Chavez, special agent in charge of the San Diego office of the U.S. Drug Enforcement Administration. "They used this tunnel to smuggle billions of dollars worth of cocaine, marijuana and other drugs into the United States for several years."

Chavez, speaking to reporters in San Diego, said investigators believe the tunnel was built at least two or three years ago by the notorious Tijuana cartel, headed by several brothers in the Arellano Felix family. He said the Arellano Felixes moved tons of drugs in carts that rolled on railroad-style tracks through the tunnel, which is about 20 feet below ground.

The drugs were then likely loaded into pickups and other small trucks, which were used to deliver the drugs to Los Angeles and beyond.

Chavez said investigators have learned that the Arellano Felixes charged other smuggling rings a fee to use the tunnel. He said that the tunnel seems to have been used exclusively for drugs and that there was no evidence that illegal immigrants were also moved through it.

The tunnel, which is four feet square, offers further evidence of the difficulty of sealing the 2,000-mile border despite efforts to cut off drug smuggling and illegal immigration. Since Sept. 11, border security has been sharply increased and drug seizures are way up. But Vincent E. Bond, a spokesman for the Customs Service in San Diego, said the tunnel shows that when one route is closed to smugglers, they find a new one.

The discovery came just days before a visit to Mexico by Tom Ridge, the U.S. director of homeland security, who will discuss border security with top Mexican officials.

Tunnels are nothing new along the border. Several have been discovered since 1990. The largest one, found in 1993, stretched about 1,452 feet under the border at Tijuana, Mexico. That tunnel was never used because it was discovered just before it was completed. Chavez said it belonged to drug lord Joaquin Guzman, known as "El Chapo," who tried to keep the tunnel secret by murdering the workers who dug it.

The discovery of the tunnel here, which Chavez said would be destroyed, is another in a series of blows for the Arellano Felixes.

U.S. officials recently froze many of the family's known assets in the United States and banned U.S. citizens from spending money at hotels, pharmacies and other Mexican businesses controlled by the cartel. Then, earlier this month, Mexican police may have killed Ramon Arellano Felix, the cartel's most ruthless enforcer and a figure on the FBI's 10 Most Wanted list. U.S. forensic scientists are trying to determine if a man killed Feb. 10 in the Mexican resort city of Mazatlan was him.

No arrests have been made on the U.S. side in the tunnel case. Chavez said investigators from the DEA and the Customs Service, which assisted in Wednesday's raid, are seeking several suspects, including a man who leased the house and was living there.

Mexican police said they have detained for questioning two people who were found in the house at the Mexican end of the tunnel during the raid.

Chavez also said that about 550 pounds of freshly packed marijuana was found in the tunnel, suggesting that it had been in use until very recently. Here in Tierra del Sol, DEA officers continued to patrol the pig farm, where two small houses sit amid signs of normal life, including several dogs, picnic tables, an old slide and a swing set, as well as rusting trucks.

A small caretaker's house had few furnishings beyond a couple of floral-print couches and a television set. Just beyond the other small, barn-style bungalow sat Mexico, behind an eight-foot green metal fence that was erected in 1995 as part of a stepped-up security program known as Operation Gatekeeper.

In the 1980s, the property was owned by Elbert Lushen Johnson until it was seized by federal authorities because of drug-smuggling activity and sold at auction. Chavez said Johnson is serving time in prison after being convicted of cocaine smuggling in Arkansas in 2000.

The property's current owners, Belinda and Raul Alvarado, bought the house in 1995. Chavez said they have been questioned by the DEA. He said authorities do not know the name of the man who leased the house from the Alvarados, who is being sought for questioning. Chavez said officials are unsure whether the Alvarados were aware of illegal activity on their property. They have not been charged with any crime.

"Everybody around here knows that you don't go down there, or the old man who lives there will come after you with his shotgun," said a woman who said she has lived nearby for 10 years.

She declined to give her name, saying that many of her neighbors were involved in drug smuggling and that her life "wouldn't be worth a plugged nickel" if her name appeared in a newspaper. She said the man living in the house has been there since last year. She said she stopped in last fall to inquire about renting the property, but the man, a Mexican in his fifties, came out with his shotgun and told her to leave.

The woman said that this secluded section of the border, about eight miles from the nearest main road, is used by Mexicans sneaking into the United States illegally. She said they sometimes travel in pickups or larger flatbed trucks, which she said she suspects are used mainly for drugs.

DEA CONFIRMS CAPTURE OF BENJAMIN ARELLANO-FELIX
DEA Administrator Asa Hutchinson confirmed this morning the capture of Benjamin Arellano-Felix by Mexican authorities in Puebla, Mexico. Benjamin, with brothers Ramon, Eduardo, Javier and Francisco head one of the largest, most violent drug trafficking organizations in the world. Ramon, the organization's chief enforcer, is believed to have been killed in a shoot-out with authorities in Mazatlan, Mexico on February 10.

Benjamin Arellano-Felix is considered the patriarch of the family and the leader of its drug-trafficking activities. Upon his arrest, Benjamin acknowledged to Mexican Authorities that his brother Ramon had, in fact, been killed in the February 10 incident. Benjamin is indicted out of the Southern District of California for cocaine trafficking and money laundering violations, and has been a priority of DEA and Mexican authorities since 1992. Recognizing the significance of this organization, Administrator Hutchinson personally organized a DEA Headquarters directed task force to exchange information and pool assets in order to aid in this effort. Benjamin's arrest will have a significant impact on the organization's ability to traffic cocaine into the U.S. and elsewhere.

"This is a great day for law enforcement, the Mexican Government, and citizens of the U.S.," said Administrator Hutchinson. "I am ecstatic with the Mexican Government's initiative and its continued cooperation with matters of such great importance. We will continue our cooperative efforts until all chief members of this notorious organization are brought to justice."

Administrator Hutchinson specifically recognized the efforts of Mexican Attorney's Office, the Mexican Military, the DEA, the FBI, and the U.S. Attorney's Office from the Southern District of California. The U.S. Government will pursue efforts to extradite Benjamin to the U.S. to stand charges. 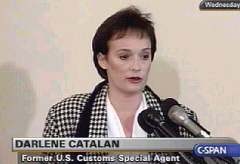 Every day our nation's security guards, border patrols, policemen, and
special forces are working to ensure that our nation is protected.      These
courageous patriots carry on the tradition of Revolutionary War hero
Paul Revere, who warned his countrymen of threats on a distant horizon.
But today it is necessary to ask what happens when our men and women on
the front lines expose security weaknesses? At this event, insiders will
discuss their experiences working with Congress on security weaknesses,
and on the need to strengthen protections for whistleblowers.

FEATURED SPEAKERS:
- Frank Serpico, the legendary New York police officer who has inspired
generations to confront corrupt bureaucracies will open the Forum and
give context to the importance of and difficulties endured by
whistleblowers trying to warn of problems.
- Senator Charles Grassley, Representative Steve Israel, Representative
Edward Markey, Congressional champions talk about the unfinished agenda
of protecting the free speech rights of whistleblowers who expose
corruption and wrong-doing.

- Aviation Security - Mr. X. Mr. X is part an elite Federal Aviation
Administration(FAA) unit that conducts covert tests, secretly probing
security at major U.S. airports. Recently featured on 60 Minutes, the
unit repeatedly found that airport security was lax.
- Nuclear Security - Ron Timm. Recently featured on NBC Dateline, Mr.
Timm heads a private firm that evaluated security at the Department of
Energy's (DOE) major nuclear weapons facilities for 17 years. Mr. Timm's
contracts with DOE were terminated in 2001 after he voiced his concerns
about the vulnerability of nuclear weapons plants to terrorist attack.
His appeal for whistleblower protection is currently pending.
- Border Security - Darlene Catalan. A former special agent with U.S.
Customs who blew the whistle on lax security at U.S. borders, not only
to human migration, but to illegal drugs and terrorist weapons. Catalan
raised concerns that 5,000 to 10,000 un-searched, unchecked pressurized
rail tanker cars are entering the U.S. every day from Mexico. An
estimated 500 to 1,000 of those tanker rail cars contain tons of narcotics.
- FBI Crime Investigations - Dr. Frederick Whitehurst. As the FBI's
highest-rated explosives residue expert, Dr. Whitehurst brought
allegations of deficiency and corruption against the FBI crime lab over
cases like the World Trade Center bombing and the Oklahoma City bombing.
Even though a Justice Department investigation confirmed these
deficiencies, Whitehurst was sent to a psychiatrist and suspended from
his job. He subsequently won a retaliation suit.